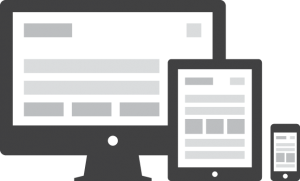 Mobile phone use has skyrocketed in the past few years, pushing discussions of responsive design to the front lines of web design. Recent statistics suggest that over half of all American adults now own a smartphone, and that millions more own tablets and e-readers.

Viewing a website from one of those tiny screens is quite a change from the traditional desktop monitor. However, numbers show that around 63 percent of adults who own cell phones access the Internet with those devices. Incredibly, that percentage has doubled in less than five years.

The idea of a website that morphs itself into the perfect viewing experience based upon a user’s device isn’t a new concept in web design. Many early websites in the 1990s would suggest that users access the page with a specific web browser for the optimum experience. That trend was soon squashed by public outcry, who didn’t want to be told what browser to use and when.

Websites started to feature code that would recognize what browser a visitor was using and would change certain elements of the page automatically. That basic idea now influences today’s responsive design techniques. However, responsive design options today feature dramatic changes based upon device rather than browser.

Many companies that offer website CMS platforms, such as WordPress and Shopify, are providing responsive design themes for their users. This catering toward mobile is also being matched by Google, which recently released its Hummingbird algorithm, specifically designed to cater to searchers using mobile devices.

All a business needs to do is look at successful Internet-based companies to see the influence and spread of responsive web design. NBC News very recently pushed a radically different interface on its website, which clearly caters to mobile users. The sweeping design change from NBC shows that major companies are doing everything to cater to a mobile audience.

Some companies are even forcing smartphone users to use the mobile interface and will prompt users to download a mobile app if they haven’t yet bothered to do so. Online auction titan eBay no longer allows smartphone users to access its regular website through a mobile phone and automatically directs users to its mobile website.

It’s essential to understand that traditional methods of accessing the Internet, such as through a desktop or laptop, will probably never go away. This means a company can’t cater wholly and completely to a mobile or tablet audience. Consider the huge backlash against Microsoft when they released Windows 8; the interface was designed for consumption on a tablet computer, which annoyed many desktop users. Sales of Windows 8 haven’t been as healthy as prior versions of the operating system, and it’s because Microsoft failed to cater to different devices.

Companies must remember that a pretty interface isn’t the only feature that must be provided to visitors. Updated content and content marketing remain some of the best methods for spreading the word about a company. Today’s content marketing opportunities include a wide array of options such as E-books, guest blogs, podcasts, and social media marketing.

A website publish amazing content frequently, but if mobile-based users aren’t able to access that content, it’s entirely wasted, resulting in a lack of traffic and sales momentum. Use responsive web design to ensure the best possible experience for each visitor while also employing content marketing to make sure those visitors know about the site.