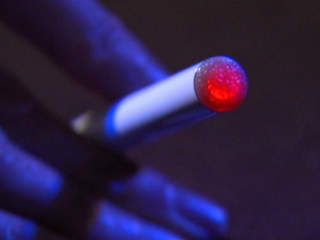 It’s no secret that millions of people in this country still smoke. Advertisements for smoking can be seen many places — although they’ve been joined by anti-smoking ads.

There’s been a constant push and pull around the world about tobacco, but now, in the new technological age, there’s an alternative to traditional cigarettes. They’re called e-cigs, and they’re all the rage. Here’s four reasons why.

1. There are no by-products

One of the worst things about cigarettes is all the gross stuff that comes out of them. There’s ash, butts, the smell, all the toxic stuff in second-hand smoke.

But all of that goes away when we talk about e-cigs. There’s hardly any smell; whatever odor there is, is a pleasant after-aroma of the flavor. The cinnamon flavors create really nice aroma that always reminds me of Christmas.

E-cigs tend to be safer and more pleasant for people around the smoker. I used to live with a smoker, and even though we kept our clothes in separate closets, I always smelled like smoke.

There’s also less waste. Gone are the sheer number of packs that get thrown out once they’re empty, and all of the butts and ash that falls on the ground. E-cigs are more environmentally friendly all around.

2. They can save money

Packs of cigarettes can cost anywhere from $5 to $9 a pack. Multiply that by a couple of packs a week, or a pack a day, and it’s taking a big bite out your finances. E-cigs may cost a bit more up-front, but the flavorings and the nicotine content in the e-cig works out to roughly 10:4.

That means you can get the content of 100 cigarettes for the price of 40; and there’s only one e-cig … which adds to the environmentally friendly reasons from point number one.

3. They’re healthier for you

Now, I’m not going to make a false claim that nicotine, in any form, is healthy for your average human. But e-cigs definitely get a higher health rating than traditional cigarettes.

These health factors are also what allow the e-cig user to skirt smoking bans: they don’t have an impact on anyone else in the space.

And technically, what is puffing out of the end of the e-cig is not smoke, it’s vapor. Most people aren’t offended by it, so people can smoke inside, at their desks, in restaurants … all while protecting the health of those around them. You’re seeing how all of my points are connected, yes?

4. They can help you quit

This sounds a little counterintuitive, I know. Aren’t you just trading out a regular cig for an electronic one? Maybe yes and no.

Different e-cigs and liquids have different amounts of nicotine in them. So, for example, you could start off with a higher dose of nicotine and then step down, gradually, until you’re not dependent (or not as dependent) on the drug anymore. At that point, you can continue to smoke the e-cig out of habit (like drinking decaf coffee) or you can just lay the e-cig to rest.

There are tons of options when it comes to e-cigs, and many e-cig stores can help you get set up with the e-cig that best suits your needs, your life, and your tastebuds.