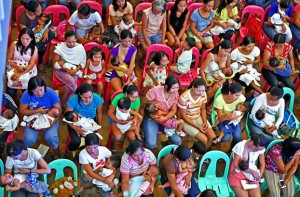 Some records were meant to be broken. Apparently that includes the record for the most women simultaneously breastfeeding.

The current record for mass breastfeeding currently stands at more than 15,000. However, it looks like some 21,000 Filipinas (or Pinays, as they are sometimes called) threatened that record on Oct. 24.

The whole point of the en masse breastfeeding exercise was not only to break a world record, but also to break a social taboo. As with many other parts of the world, bare boobs are a no-no in public in the predominantly Catholic Philippines.

Keep in mind, this is the same part of the world that, when discovered by Magellan, wasn’t characterized by taboos concerning public nudity. Married women were easy to spot back in the 16th century: they would wear only a loincloth. Unmarried women were even easier (and perhaps more enjoyable) to spot: they didn’t wear a loincloth.

The effort was organized by a group that calls itself Breastfeeding Philippines. Clearly, it’s a group that lives up to its name.

“When women bare their chests for sex in movies or wear skimpy clothes the public thinks its okay, but when a mother bares her breast to feed a child, people generally think its gross,” said group director Nona Andaya-Castillo.

“One of our members was once told to breastfeed her child in the toilet. This thinking and attitude has got to stop,” she added.

The event was not held in one centralized location. That would be a difficult feat to accomplish in a country the size of the Philippines, where people frequently don’t have the means to travel. Instead the concurrent breastfeeding episode took place in about a thousand cities across the numerous islands of the South Pacific nation.

The current world record for simultaneous breastfeeding, according to Guinness, stands at 15,218. It was set back in 2007.

The number of women who participated in the Breastfeeding Philippines event was estimated to be around 21,000. If that number stands, then a new world record has indeed been set.

It could take Guinness representatives as long as three weeks to validate the record.

Roughly 500 breastfeeding moms were bussed to one of the locations for the event, a convention center in Marikina, a city just east of Manila.

The moms at the site didn’t just participate in breaking a world record, though. They were also given tips about proper breastfeeding techniques. Additionally, they were taught how to calm crying babies and how to clean their nipples.

Organizers of the event are also trying to ensure that a 1986 law, called the Milk Code, is not reversed. That law prohibits advertising infant formula for children who are less than two years old.

“This activity is meant to send a strong message to legislators not to be swayed by these multinational milk companies to weaken our law,” Andaya-Castillo said.

A spokesman for the Infant and Pediatric Nutrition Association of the Philippines, a lobby group for one of those milk companies, was not available for comment.

Whether or not the effort of Breastfeeding Philippines will remove the social stigma associated with public breastfeeding remains to be seen. Clearly, the organization is attempting to create an environment in which breastfeeding is as natural a public event as riding a bicycle, holding hands with a loved one, or even repairing a vehicle.

Those are all activities, frequently witnessed in public, that don’t cause any gasps nor giggles.