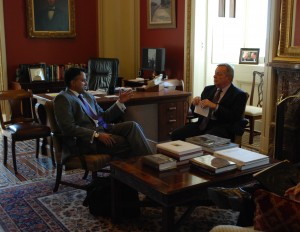 Way back in 2010, the United States was still reeling from the 2008 recession, and Congress desperately needed to do something to help struggling Americans recover. With the passage of the Dodd-Frank Wall Street Reform and Consumer Protection Act, the Obama Administration thought they nailed it. Boasting the most significant changes to governmental financial regulation since the 1930s, Dodd-Frank strove to prevent further costly bailouts and future financial crises with a variety of provisions on the operations of financial institutions, not the least of which is outlined in the Durbin Amendment.

Tacked on last-minute by the Illinois senator that lent the addition its name, the Durbin Amendment has imposed strict limitations on fees related to debit and credit cards, which means that any card-holding American should be aware of the ins and outs of the proviso.

Senator Durbin’s main effort in writing and inserting the Durbin Amendment into Dodd-Frank was to limit (and potentially eliminate) interchange fees, which are fees imposed on merchants for any card-based transactions — or, more accurately, fees levied by card-issuing banks on acquiring banks, who then impose those charges on their merchant-customers.

Interchange fees, which are also known as swipe fees, have a purpose: card-based transactions require a number of financial burdens, including liability and overhead. However, in the years before the 2008 financial crisis, most banks were abusing interchange fees to make substantial profits. The reason Durbin wanted to rein in interchange fees was because mega corporations, who have major influence with banks, were able to negotiate for lower rates, while small businesses were forced to lose profits due to fees or lose profits due to an inability to accept card transactions.

Though Durbin attempted to tackle a specific problem, his amendment is woefully vague. It stipulates that the Federal Reserve is to cap interchange fees at “reasonable” rates, which the Fed then interpreted as capping debit purchases at .05 percent plus $.21 per transaction. Banks could increase that rate by $.1 if they demonstrated effective fraud prevention practices.

While economists and others continue to watch and report the continuing effects of the Durbin Amendment, many of its effects remain obvious even to the casual observer.

As banks have done throughout history, most card issuers struggled to find methods of maintaining their bottom lines even without the income from interchange fees. Because debit cards became so much less profitable after the amendment passed — going from roughly .95 percent plus $.20 to .05 percent plus $.21 — banks no longer incentivized debit card spending and any benefits that coupled with debit cards. Most Americans noticed the dramatic end to opportunities for free checking and rewards debit cards, as well as a spike in the amount of fees for maintaining a checking account. Rewards debit cards are just now beginning to make a reappearance, but they are certainly not as pleasing as they once were.

After banks forfeited debit, they began to push payment types that were unregulated by Durbin, like prepaid debit cards. Because the Fed failed to associate the Durbin Amendment with credit transactions, interchange fees for credit cards began to increase wildly. In the United States, credit interchange fees are usually well over 2 percent, but in other developed countries, interchange fees rarely break 1.5 percent. This staggering difference can be linked directly with banks’ loss of income after Durbin.

As one might guess, banks staunchly opposed the passage of the Durbin Amendment, but a number of other merchants disagreed with the Fed’s interpretation of the law. The National Association of Convenience Stores (NACS) and the National Restaurant Association sued the Fed in 2013 to gain stricter regulation on interchange fees. Though initial rulings fell in favor of merchants, believing the Fed’s rates to fall outside the realm of “reasonable,” both the Court of Appeals and the Supreme Court found in favor of the Fed, and today, the Fed’s rate remains steadfast despite continuing lawsuits by banks and merchants around the country.

Meanwhile, a number of other interchange fee–related lawsuits have popped up in recent years. One of the biggest on-again, off-again struggles is between Walmart and Visa. For over nine years, Walmart (joined by a number of other retailers, small and large) has asserted that Visa’s interchange fees for debit and credit are absurdly high. Now backed by Senator Durbin himself, Walmart continues to battle on for the rights of American merchants everywhere.

Slow Response for Your Credit Card Complaints? Take it to Social Media