Drunk drivers are a nightmare on the road, causing extreme risk to those around them. According to MADD, around two out of every three people will be involved in a drunk driving accident in their lifetime, 29.1 million people admitted to driving drunk at some point during 2012, and in 2013, one person died every 52 minutes from an accident caused by drunk driving. It’s an epidemic that has swept the nation since vehicles were invented.

But according to some recent findings, drunk driving may not be the worst threat on the road. In fact, it seems that drowsy driving is actually worse than drunk driving. To prove it, researchers have put both drunk and drowsy driving to the test to determine which is more dangerous to fellow drivers. 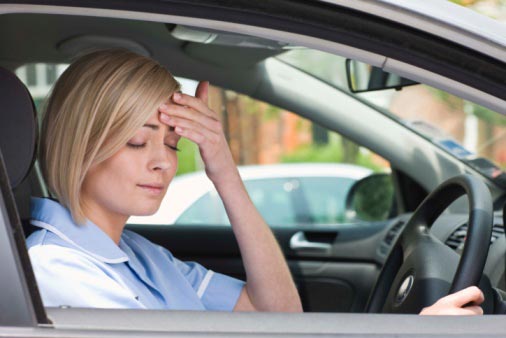 The television show MythBusters put the question of drunk vs. sleep-deprived driving to the test. This after one study by the AAA Foundation for Traffic Safety found that 17 percent of all fatal car accidents (one in six) was caused by drowsy driving.

They performed the study first-hand using members of their own team. They did this by setting up a crash course in an empty parking lot with traffic cones and cutout pedestrians. Then, two of the MythBusters team members stayed up for 30 hours straight so they’d be exhausted for the test drive, while the other two downed a few shots right before taking the wheel.

The results of the study were a little surprising. The two team members who were well above the legal limit for blood alcohol levels were actually more successful at driving the course than the two who had stayed up all night long. One of the sleep deprived team members driving was calculated to be 10 times worse than the drunk drivers, and the other was three times worse.

The MythBusters study in conjunction with AAA are just two of many studies that show the erratic dangers of drowsy driving. The AASM has concluded that 80,000 drivers a day fall asleep at the wheel, causing approximately 250,000 accidents per year. That means that 20 percent of all automobile accidents are caused by tired drivers.

Why Are There Lesser Punishments for Drowsy Driving?

Drowsy driving is more dangerous for road dwellers than drunk driving, so why doesn’t it receive as harsh of punishments? The law has stepped in to help curb the problem, but the punishments for drowsy driving are significantly less than those for driving under the influence.

“Most states classify fatigued or sleep deprived driving under reckless or negligent driving,” according to an article from Rosenfeld Injury Lawyers. “These have much lighter consequences for the drivers, even when their actions cause a fatality.”

The same article goes on to explain that the biggest reason that the punishments for sleep-deprived driving are lessened simply because of the difficulty in prosecuting those cases. With charges for driving under the influence, it’s easy to measure the blood alcohol level and determine if someone is drunk enough to be deemed a danger to the road. However, it’s very difficult to prove that any given accident was caused by a tired driver.

Despite these challenges, efforts are still being made to reduce drowsy driving and make the roads a safer place. As more cases arise, laws may continue to toughen up when it comes to drowsy driving.