I feel a bit like Jeffrey Zeldman here in the sense that many people I’m friends with or acquainted with have recently had their companies purchased by larger companies. My bet is that the next company I’m friendly with to be purchased will be FeedBurner, but who knows 🙂

Michael Arrington alerted me to the announcement that Google has purchased Measure Map, a weblog analytics application put together by our friends at Adaptive Path. Adaptive Path specializes in user experience design, and has worked on some great projects like NPR’s redesign, Blogger (with the design lead by our buddy Doug Bowman), and many others. As part of the deal, designer extraordinaire will be heading to Mountain View to join Google in some capacity — let’s hope they instantly make Jeff their Chief Creative Officer or something cause he could do some real good stuff over there if given the chance, which I’m sure they will.

The guys and I were privy to Measure Map back in August when we were out in San Francisco, and we were given an exclusive demo by Jeff and Lane. I wrote about this and compared it to Shaun Inman’s Mint and it was concluded that both were quality applications targeting slightly different niches. Turns out that they are both phenomenally successful, so we’ll see who ends up buying Shaun’s company 🙂 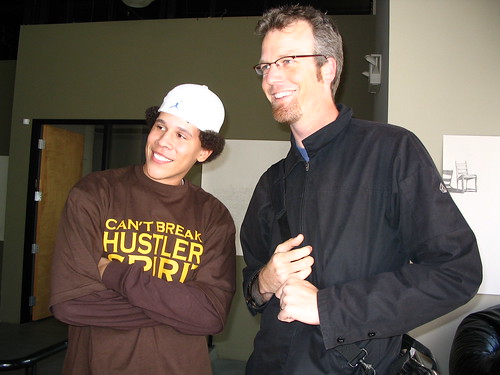 A picture of Paul and Jeff Veen over at the Adaptive Path offices. Paul’s 6’2″ so you can imagine how tall Jeff actually is. Photo courtesy of Matto.