Driving fast is a blast. In the real world, we should consider safety, speed limits, etc. In video games, we shouldn’t. Speeding dangerously without consequences is pure joy! Driving and racing games have been around since the early arcade days, when joysticks were king. Today, we can race virtual cars on tablets and phones, skidding and turning by simply tilting our devices. Madalin Stunt Cars 2 is a new driving game, with modern graphics and hassle-less multiplayer. 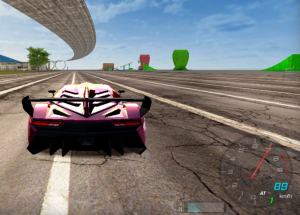 Madalin Stunt Cars 2 is a type of sandbox game. There is no way to score points. No one wins first place or settles into last place. In fact, there’s not even a ranking system. This game isn’t meant to be highly competitive. It’s about cruising on fantasy courses, bashing obstacles, and soaring through the air. Any game that lets you fly a Lamborghini is A-OK in my book.

Single-player mode consists of driving freely. The sandbox genre isn’t about limitations. You’re free to explore every corner of each vast map. There are flat raceways, elevated tracks, and basic ramps. Drift into a new section, and you might encounter deadly dangerous launch platforms, loops, and box pyramids. Some obstacles are movable, and others are not. For instance, you can bounce a giant soccer ball anywhere on the map. That makes for an entertaining mini-game. On the other hand, if you crash into a pile of tires, they won’t move.

Multiplayer mode is a free-for-all—but not the shooting type. In Madalin Stunt Cars 2 game, anyone can drive wherever they want. When two cars crash into each other, there are no lasting effects.

Vehicles don’t incur damage, and nobody scores. So, multiplayer mode is essentially the single-player sandbox with others. Drivers can chat and track each other’s location on the live map. If you’re looking to cause some chaos with other risk-takers, multiplayer mode can provide plenty of delightful playtime.

The current version of Madalin Stunt Cars 2 features 31 vehicles. All four-wheelers have the potential to be fast and furious. There are famous models from Audi, Ferrari, and Porsche. Slightly less expensive street cars are included, too, such as the Dodge Charger and Mini Cooper. There are coupes and hatchbacks for every type of driver—assuming you have the need for speed.

None of the cars in the garage are officially named. But, you can be sure of the inspiration for each vehicle. The most attention-grabbing cars in this game are equal to those in the real world. There’s the Ford GT, Lamborghini Diablo, and Lotus Evora. If you’re into customization, each vehicle comes in any color you desire. Slide the red, green, and blue levers to achieve literally any shade, from slick black to vibrant pink.

Madalin Stunt Cars 2 isn’t going to change your life. But, it will satisfy your inner stunt driver for hours and hours. The creative, oversized obstacles are quite amusing in both modes, and that’s enough to warrant top marks.